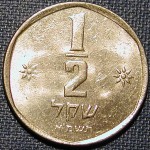 The Jewish people are asked to contribute a “half-shekel” toward building the sanctuary in this week’s Torah portion Ki Tisa. There are a number of explanations of why a “half” shekel was mandated by God and not a full shekel. I’d like to suggest an answer based on an event that happened this past Shabbat.

We celebrated the completion of Tractate Yoma as part of the Daf Yomi cycle at the third meal in our local Shul. A fellow congregant asked me if I was one of the celebrants who had completed the tractate. I smiled and said, “Yes, but with some gaps.” Out of the 88 pages, I had missed about 10 that I hadn’t made up yet. Life happens.

My Rosh Yeshiva, Rav Noah Weinberg Zt’l taught us that Judaism and Torah are not “all or nothing.” Of course we are obligated to keep all of the 613 commandmants, and that is our goal. But we have to remember that Torah and Mitzvot are tools to build a relationship with the Almighty. And just like our human relationships are not “all or nothing.” The same is true of our relationship with God. I may forget to buy a gift for my wife on our anniversary, but that doesn’t negate all the times I called her on the phone just to say I was thinking of her. God cherishes every act we do for the sake of our relationship with Him even if we sometimes mess up.

The yetzer hara tries to trip us up by telling us Torah and Judaism are all or nothing. “If you can’t commit to being at Daf Yomi every night for SEVEN YEARS, why bother starting?” If I would have given in to that logic, I would have ended up with zero pages of Talmud, rather than the 78 pages of Yoma that I can keep with me for eternity.

Perhaps that’s what the Almighty is hinting at by telling us, “just bring HALF a shekel.” Sometimes 50% can mean as much to our relationship with God as 100%. And by taking pleasure in the things that we do accomplish, it will motivate us to strive for accomplishing even more.

The Torah Model for Marriage

This is a presentation of the Jewish approach to marriage and sexuality, highlighting the benefits of entering into a monogamous heterosexual relationship for life, without having premarital relations. END_OF_DOCUMENT_TOKEN_TO_BE_REPLACED